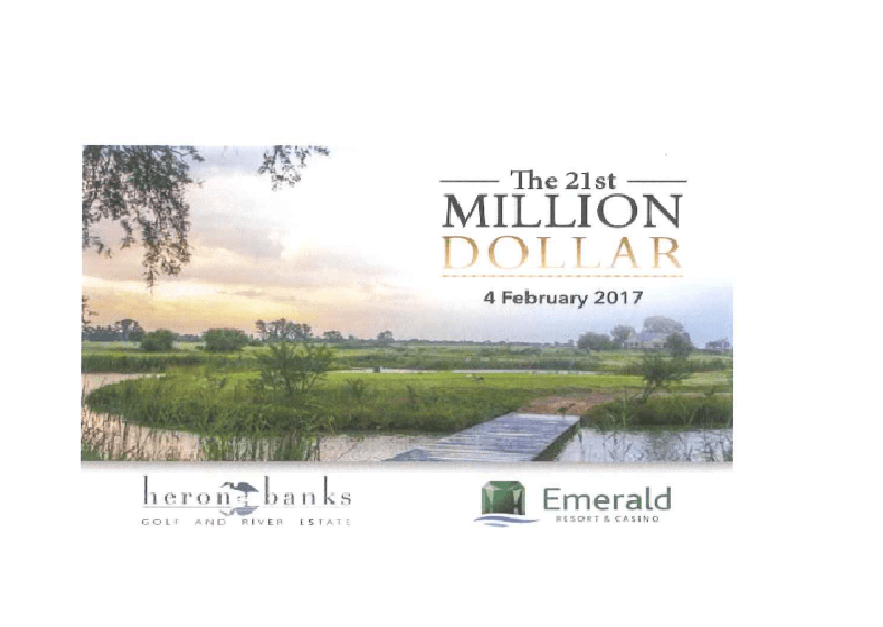 (THE BIGGEST & GREATEST PIGEON RACE IN THE WORLD!)

(THE RACE WITH THE PROVEN TRACK RECORD)

(THE OLYMPIC GAMES IN THE PIGEON WORLD)

DUE TO BE HELD AT

ANOTHER RACE SEASON STARTS IN THE SOUTH AFRICAN SUNSHINE.

THIS PHOTOGRAPH SHOWS THE COMPLETED BRAND NEW STATE OF THE ART 300 FOOT RACING LOFT WHICH IS SITUATED ON THE OUTSTANDING HERON BANKS GOLF & RIVER ESTATE, VAAL RIVER, SOUTH AFRICA. IT HAS THE TRAPPING/CLOCKING SECTION IN THE MIDDLE OF THE LOFT, WHICH IS BELOW THE ADMINISTRATION CENTRE AND HAS 22 EQUAL SIZED SECTIONS EACH SIDE THAT ARE ALL ACCESSED FROM A FULL LENGTH CORRIDOR THAT RUNS ALONG THE BACK OF THIS FABULOUS LOFT. ALL THE SECTIONS HAVE GRILLED FLOORING AND THE LOFT HAS A PERCH CAPACITY FOR WELL OVER 9,500 PIGEONS.   Just recently Air Sport Internationale were approached to support the Macmillan Cancer Care “Go Sober October” event in the United Kingdom and they very graciously agreed to try to help. They very kindly donated a “FREE ENTRY VOUCHER” into The 22nd SAMDPR which would be auctioned off with many other kind donations on Monday 31st October 2016, most of which were supplied by top pigeon fanciers around the United Kingdom. Mike Cooney from Manchester entered himself for this national no drinking alcohol for a month competition in which there was nearly 68,000 entries. Mike managed to raise a staggering £20,013 during this campaign and actually won 1st place for his dedication and efforts. His fundraising effort was a direct result from collecting and auctioning some really top class pigeons and other fantastic items, which resulted in a feather in his cap for sure and also for the sport of pigeon racing. This was a sizeable donation for a well deserving cause and a huge boost for the esteem of the fancy as a whole. WELL DONE TO MIKE AND ALL THAT DONATED OR SPONSORED SOMETHING AND TO THOSE PEOPLE THAT PURCHASED ITEMS DURING THIS OUTSTANDING AUCTION.   If you wish to know any more information on this prestigious international pigeon race please contact me ASAP:-   Paul Smith, United Kingdom Race Team Co-ordinator/Shipper and International Race Co-ordinator for The 21st South African Million Dollar Pigeon Race, which is due to be held at Heron Banks Golf & River Estate and Emerald Resort, Casino & Hotel, South Africa on Saturday 4th February 2017. Regency Lofts Limited, 2, Highmead, off Coltsfield, Stansted Mountfitchet, Essex. CM24 8LJ. England. Tel/Fax:- 01279-812005. (Int. Code:- +44-1279-812005), Mobile:- 07860-568216. Email Address:- reglofts@aol.com Regency Lofts Website:- www.regencylofts.com Skype Address:- talbot7944 Twitter Address:- PaulSmith@SmithReglofts The South African Million Dollar Pigeon Race Website:- www.samdpr.com]]> 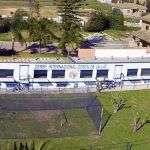